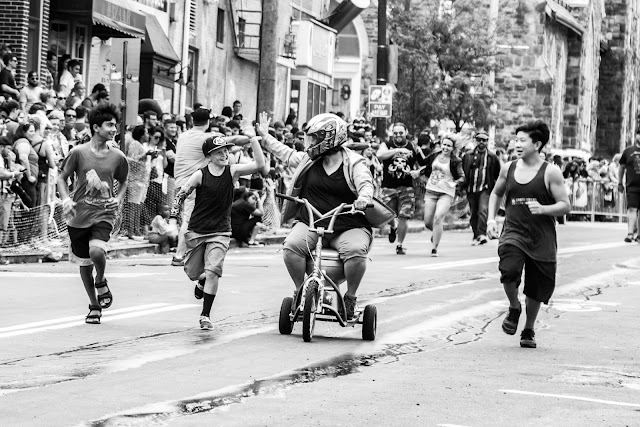 Registration will be the day of the race - 10am - Noon at the Registration Tent at 36th and Chestnut.

1. All racers must include at least one clean human defecation device.
2. All racers must be gravity-powered, and may not have any other power or propulsion source
3. The dimensions of a racer may not exceed 5 feet wide, 12 feet long, and 13 feet tall.
4. There are no minimum dimensions for a racer, but it must carry at least one pilot during the race.
5. The racer must be capable of steering both left and right.
6. The racer must have a brake and be capable of stopping without damaging the street

13. Races will be held as single-elimination tournament-style drag races
14. Each team will be placed into tournament brackets on the day of races by race officials
15. A team may use up to three crewmembers as pushers at the beginning of each race.
16. A team must have at least one crewmember as a pusher. A pusher can also serve as the pilot, but must be fullyseated on his/her defecation device BEFORE the front of the racer leaves the push zone.
17. Pushers may only push within the marked push-zone, which will end 20 feet beyond the starting line.
18. All pilots must remain seated on his/her defecation device at all times while racing.
19. All pilots are required to wear a helmet at all times while racing.
20. The racecourse will be approximately 600 feet long.
21. There will be absolutely no physical contact with other teams or sidelines when racing. Physical contact is NOT SAFE, and may result in disqualification of all teams involved. Just don’t do it.